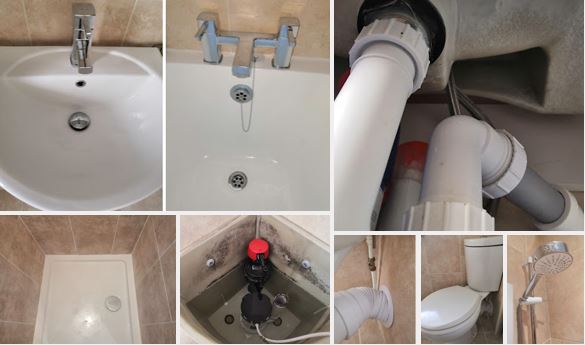 What can cause a leak in the bathroom?

It will likely not surprise you that bathroom leaks are some of the most common leaks that occur in properties. In fact they feature in the top 10 water leak causes report we did, directly and indirectly.

As you’d therefore expect, we are very experienced in plumbing leak detection and the various tools and techniques to find them, even in hidden locations.

We’re expecting that you can guess most (if not all) of the main culprits but each has it’s own challenges, which we will go through below. Let’s start with the one the bathroom was named after in the first place!…

Perhaps surprisingly, when looking at the subject of bathroom leaks, leaks from your bath are not the most common type of leak you will see. That’s not to say that they don’t happen, it’s just that some of the other things on this list are a bit more common.

So where are the places that your bath might leak?

The thing that varies with each different bath is how they are fitted, placed (in a corner, against a wall, freestanding etc) including fixtures and fittings around them – for example tiling, bath panels etc. Bathtubs are something that feature in our list of the top five things that, if they break, leak water in your property. As you can see from the list above, there are several parts to that.

In some instances, bath panels are easily removable to access the area under and around the bath. This can provide a lot of useful information and readings to check for bathroom leaks. However, in some properties, this may not be easily accessible, which makes trace and access work trickier (not impossible though!). Next on the list of bathroom leaks is…

We have an interesting article you might find useful that looks at how much water do items use or hold, including things in your bathroom and other items from around the house.

One of the most common bathroom leaks that we see are shower leaks. This is, in part, because when you compare to baths for example. Showers are often less contained, involve more movement / knocks etc and water splashes around much more. That said, when looking at what causes shower leaks, there are certainly similarities with baths also. Clearly showers can be fed from either a direct hot water source or they can be fed by cold water to an electric shower too.

Here are the main locations of bathroom leaks in showers…

We have a more detailed article about a shower leaking through ceilings.

Another common bathroom leak is a toilet leak (or very occasionally bidet leaks). Toilet leaks are somewhat different to some of the others on this list as you will see, mainly due to the mechanisms of the toilet but also the pressure that they can exert (how much water they flush quickly) on plumbing fixtures. Here are sources of toilet leaks…

Bathroom leaks involving sinks are are not the most common leaks in bathrooms but they do happen. Sinks get used frequently and often suffer from wear and tear issues as well as accidental breakages (for example dropping something in it like a bottle of aftershave or perfume). Here are some of the different types of sink leaks…

In bathrooms there are usually radiators or, increasingly common are towel rails. These can also be a source of bathroom leaks much like radiator leaks in the rest of the property. Examples of leaks include…

There are a few other potential causes of bathroom leaks, including…

Bathroom leaks or en-suite bathroom leaks do have challenges that are more common than in other rooms of the house (they can happen elsewhere too) but they are worth bearing in mind.

Hopefully all the information above helps to highlight why bathroom leak insurance claims are fairly common and one of the places that leak detection is both common and, in many situations, more complex due to things like fixtures and fittings (including plumbing) being less accessible.

That is why leak detection specialists are trained and have professional leak detection equipment to help maximise the chances of finding your water leak. If you have a bathroom leak or leak in any other part of your property, get in touch with us and our friendly team will help.

What happens if water gets under tiles?

If you have a water leak that is under tiles in your bathroom or causes water to leak into the area underneath tiles, this can be a challenge for a few reasons. Firstly, as we are sure you know, tiles cannot generally be uplifted easily and replaced without causing damage (especially where there is strong adhesive) and also, tiles can act as a vapour barrier trapping water under them which can contribute to further damage.

Does water leak through tile grout?

Water can leak through grout in tiles, especially if there is water present for some time. The other thing that can add to this, which is fairly common, is that if there are any cracks or gaps in your grout, they will let water through too. In fact, exposure to water from a water leak can ironically contribute to this, in particular if wooden flooring is underneath, expanding from moisture.

Tags:bath leakbathroom plumbing leakshower leaksink leaktoilet leak
We use cookies on our website to give you the most relevant experience, remembering your preferences and repeat visits. By clicking “Accept All”, you consent to the use of ALL the cookies. However, you may visit "Cookie Settings" to provide a controlled consent. Read More.
Cookie SettingsAccept All
Manage consent