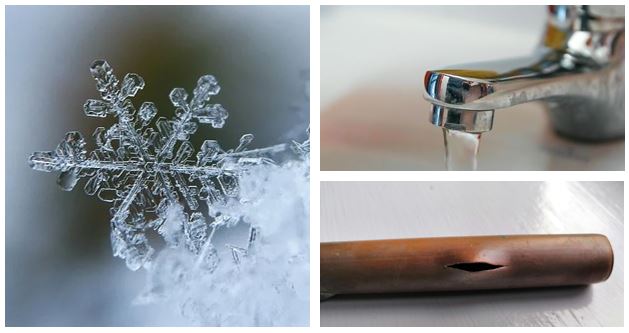 In our recent article about the Top 10 Water Leak Causes, number 1 on that list was frozen water pipes. On this page we are going to look into that in some more detail to understand what causes frozen pipe water leaks, what you can do to prevent them, what to do if your pipes are frozen and, finally, what to do if you have a leak from having frozen pipes.

The image above is of a copper pipe which split, causing a leak, because of having frozen pipes. As you can see, it is quite a dramatic split and caused a major water leak. A frozen pipe like that, which has thawed and runs water out is almost like having a hosepipe running in your walls, floors or ceiling. In fact, using our water leak calculator, if you select ‘fast spray’ (50% if normal flow – best estimate for this) and ‘medium’ water pressure of 12 litres per minute.

That adds up to:

You can see why, if you don’t catch such a leak early it can cause major water damage to your property, which is not surprising given the amount of water involved. In some instances, frozen pipes can cause connections or joints between pipes to sheer completely which leaves you exposed to the full mains flow of water.

How to Spot Frozen Pipes

On our page about the Top 10 Signs of a Water Leak, we looked at some of the common warning signs that you may have a water leak and, if you have a water leak from frozen pipes, they all apply too. However, one of those things on that list (reduced water pressure) can be an early warning of pipes becoming frozen. Why?…

As pipes start to freeze, ice that has formed in the pipes can either cause blockages or reduce the diameter of the pipe inside, both of which can reduce flow to your taps. So if it is freezing weather and you notice this, be aware that your pipes might be starting to freeze.

On the subject of cold weather, when you get a particularly bad winter storm, such as the Beast from the East, over a few days with especially cold temperatures, frozen pipe leaks are much more common, especially as the pipes thaw leaving otherwise sealed (by the ice) cracks or splits to allow water to run out of them.

This data below from google trends shows this for the infamous and unprecedented winter storms that struck the USA in early 2021, with Texas being particularly badly hit.

As you might expect, demand for water leak experts such as ourselves surges during this time and people can often get booked out, not only in finding leaks but doing the water damage restoration work afterwards. The two things often go hand in hand.

As we always say, if you have a water leak or water damage, get help quickly so you can get the problem focused on ASAP. Our trained technicians are experienced at helping to minimise the damage from such an incident. That can be harder in extremely busy periods such as the Beast from the East or other cold weather events which cause frozen pipe water leaks.

How to Find a Frozen Pipe?

Once you believe you have a frozen pipe, the question is then how to find it. This is not always a simple task, however, there are ways that you can narrow down where it is likely to be.

Clearly every situation is unique depending on the property, how it is laid out, how well it is insulated (including pipes themselves), levels of maintenance etc. However, these are some general things to consider when locating frozen pipes (if in doubt get help from a professional):

The simple answer is no, however, they are more at risk of a burst pipe. As you will likely know, when water freezes it expands. This puts pressure on the pipework surrounding it which, in some situations, will split (like the picture at the top of this page), crack, or sheer off sometimes.

If you believe that you have frozen pipes in your property, be alert and get help if needed. Clearly the longer the pipes are frozen, or the more of them that are affected, the higher the risk of a leak.

How to Defrost or Thaw a Frozen Pipe?

This is not necessarily as easy as you might think. Especially, as we said earlier, you might not be able to exactly locate where needs defrosting or thawing. Also, as we again said earlier, it is possible that it is not just one location that is affected it can be many. Plus, pipes may not always be accessible to do anything with them anyway. Generally pipes that are concealed (in walls and ceilings etc) are less likely to be frozen in a house, especially if it’s heated.

That said a few things to consider:

As we have said when talking about other things on this site, prevention is often better than cure. So lets look at…

We mentioned the Texas Winter Storms of 2021 earlier. One of the things that made that far worse from a frozen pipe perspective is that:

How do you Prevent Frozen Pipes?

Here are some tips to consider to potentially help reduce the risk:

One thing to remember about frozen pipes, linked to number 11 on the list above is that insurance policies often have a clause with exclusions for certain things when houses are unattended, because of the increased risks this can bring. Some insurance companies also have additional cover for this, that said, in some instances this will have requirements too. Check with your insurer.

Are Frozen Pipes Covered by Insurance?

As we have said elsewhere, water leaks (often called ‘Escape of Water’ by insurance companies) are one of the most common claims people make on their insurance. We have a separate guide on how to claim for a water leak on home insurance which gives more information on this.

As we say in that guide, exactly what you are covered for will depend on your individual policy so, if you want information on that, speak to your insurer.

Also remember to check if you have trace and access cover (which can be an extra on your home insurance) too as that could cover the cost of finding and fixing your water leak as well as the damage that your regular policy covers you for.

We hope you found our guide to frozen pipes useful!

Tags:defrost frozen pipefrozen pipe home insurancefrozen pipe outsidefrozen water pipethaw frozen pipe
We use cookies on our website to give you the most relevant experience, remembering your preferences and repeat visits. By clicking “Accept All”, you consent to the use of ALL the cookies. However, you may visit "Cookie Settings" to provide a controlled consent. Read More.
Cookie SettingsAccept All
Manage consent