When carrying out water leak detection work something which frequently comes into consideration is Pressure Relief Valves (PRVs) on boilers, Which are not to be confused with pressure reducing valves (also called PRVs in the plumbing world!), which we will explain later.

We have a useful diagram and explanation later.

Pressure relief valves especially come into the equation when someone has a boiler pressure dropping causing it to turn off and central heating not to work. In such situations people sometimes find themselves needing to top up their boiler pressure in order to get it working again.

Although this it is not an especially uncommon occurrence, doing it regularly suggests a problem with the central heating system, which could be associated with a water leak. As we have discussed before this can be caused by a number of factors one of which is possibly a problem with the pressure relief valve.

What Does a Pressure Relief Valve Do?

In some respects a pressure release valve explains itself what it does but let’s help with a simple explanation, other than ‘a device to relieve pressure’.

It is quickly worth mentioning as usual that exactly how boilers and central heating systems are set up will vary according to the type of boiler and how is being installed.

That said pressurised or sealed central heating systems should have a pressure relief valve. as we explained in our article about boilers losing pressure, pressurised boiler systems have an optimal range of pressure they operate in. The actual operating pressure of the boiler will vary from time to time including when it is on versus when it is off on many occasions

Basically, if the pressure on the system reaches the calibrated level it releases some water out of the system to reduce the pressure then sealing again once the pressure has reduced to normal levels. Notice how, given their importance as a safety feature that the have a CE Marking (CE1115).

With Pressure Relief Valves, some people call them pressure release valves, some even call them PRV valves (the ‘V’ obviously stands for valve already) but effectively they are talking about the same thing usually when it comes to boilers leaking.

Just to confuse matters more, some people refer to them as Safety Relief Valves (SRVs) or even Safety Release Valves! Remember also that these terms are used for applications other than central heating boilers, for example on an air compressor or even industrial machinery. More on that later.

How does a Pressure Relief Valve Work?

To help explain how a pressure relief valve works we have put together this basic diagram above showing the main component parts and how it works. This includes:

As we said previously, each pressure relief valve is calibrated to a specific pressure and the key component of this is the calibrated spring within the body of the PRV.

As the pressure from the inflow reaches a certain level the PRV seat seal pushes up on the stem / spindle against the resistance of the PRV spring releasing the flow of water by the outflow once the pressure has lowered to accept levels the seal is closed and water stops flowing out.

If water continues to flow out even the pressure is within acceptable levels then there is a possibility of a fault with the PRV which we will look into now.

PRV faults can be caused by a number of reasons, including wear and tear, decay corrosion or a compromised seal. If the PRV is faulty, then it will possibly be releasing water from the system when it shouldn’t be either because the mechanism is not releasing at the correct pressure (normally lower) all the seat is not making a watertight seal.

As a result of this, water will be being released from the pressurised system dropping the boiler system pressure which over time may cause it to stop working and require being repressurised.

Clearly this will continue until such a point as the faulty PRV is fixed or replaced.

In many situations the pressure relief valve itself is attached in and around the pipework close to the boiler, and although there are many different designs, commonly they look like the pictures shown in this article. They are usually accessible so that boiler engineers etc can’t access them to inspect, repair or replace them.

If a pressure relief valve has been triggered and released water that can in some instances be a trigger for debris to get into the mechanism / seal causing future issues, so be aware of this.

the outlets for the PRV, in other words where the outflow water goes to, commonly feed to the exterior of the property like the example shown below so that any excess water drains outside.

See the image below on the left for an example:

Along the way to drain outside, often close to the boiler will be a tundish drain which is a funnel shaped (often plastic), drain with an air gap. This air gap serves two purposes. Firstly it allows you to see if water is leaking from your PRV through the tundish. Secondly, the air gap prevents any, potentially contaminated water from drains etc being drawn back in to the boiler, which could cause damage.

Is it Normal For Water to Come Out PRV?

Pressure relief valves are clearly there to serve a purpose and function for your central heating system and it wouldn’t be considered very unusual for them to be triggered from time to time in small amounts.

However, if you are seeing a lot of water being released, it is happening regularly or even constantly you likely have a fault that needs to be investigated. Otherwise, as we said above it will compromise the functioning of your central heating boiler system, this may show as an F1 boiler error or F75 boiler error.

As we said earlier small day to day variances in the pressure within your central heating system are not particularly unusual and help control that, in particular when warm water causes expansion in the system (also increasing pressure), expansion vessels are there to help manage this.

Expansion vessels working conjunction / compliment pressure relief valves, in particular in handling smaller variances in water pressure / expansion and contraction. Expansion vessels can be integral or exterior to the boiler itself. There are different designs, shapes colours, etc.

They will often look something like the diagram above. So as the water pressure rises slightly the diaphragm will stretch compressing the air above and then when the pressure falls the reverse happens.

Like pressure relief valves, expansion tanks can fail too, especially if the water and air tight seal between the air and water areas of the tank is broken. If that happens on a expansion vessel then water will enter the area for air and can cause the boiler pressure to drop, sometimes enough to stop the boiler working.

To find out more about a similar subject, see our water pressure calculator.

Some reasons for installing a pressure reducing valve in a property include – lowering the pressure and therefore strain on your pipe work and appliances, sometimes to conserve water, to stop all reduce water hammer problems (knocking on paperwork) or just because people prefer to have lower pressure.

As we said earlier pressure relief valves or safety relief valves can be found in other applications not just on boilers and heating systems. They can be used in devices and machinery where water, air, oil and gas are used. In general they are for safety purposes and to protect the machinery or devices themselves.

Why does a Pressure Relief Valve (PRV) Fail? 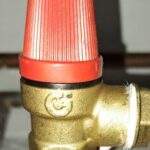 pressure relief valve can fail for a number of reasons including general wear and tear, broken seals, broken or damaged springs and also because debris has got into the mechanism compromising its effectiveness. most of these problems are resolved by either repairing or replacing the PRV.

What happens if a pressure relief valve fails? 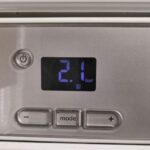 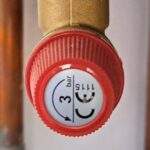 Pressure relief valves can be found number of areas but generally they are located in close proximity to the boiler on the connections between the pressurised central heating boiler itself. Remember that a non-pressurised or vented system will unlikely have one at all. They are often vented to a tank in the loft (or elsewhere) when there is expansion.

What is a Tundish used for? 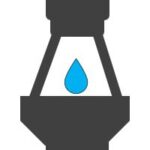 A tundish is a funnel shaped, often plastic, connection with a feed (usually from your PRV on your pressurised boiler) with a collection cup at the bottom feeding to a drain. There is a visible air gap between the top and bottom on a tundish to allow you to see any PRV boiler leaks and also to stop any water (from the drain) going back into the boiler system, which could cause issues. If you see your tundish leaking, you could have a problem.

If you have need help finding a water leak at your home with our trace and access service, get in touch with our friendly team today. We offer these services to both domestic and commercial customers, including commercial leak detection.

As experts in both water damage restoration and leak detection, we have you covered.

Tags:Boiler Pressureboiler pressure dropboiler pressure droppingboiler pressure keeps droppingpressure release valvePRVrepressurise boilerSRVtundishtundish leak
We use cookies on our website to give you the most relevant experience, remembering your preferences and repeat visits. By clicking “Accept All”, you consent to the use of ALL the cookies. However, you may visit "Cookie Settings" to provide a controlled consent. Read More.
Cookie SettingsAccept All
Manage consent