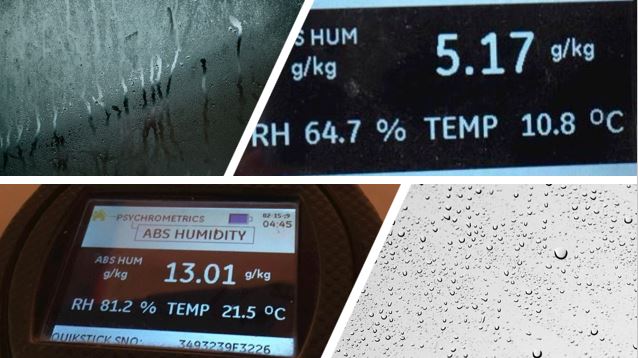 GET HELP WITH MY WATER LEAK

What is relative humidity in simple words?

Here is our definition of Relative Humidity (RH), explained – “the amount of water moisture / vapour in the air, expressed as a percentage, relative to what that air is capable of holding at a given temperature“

Also, the importance of the ‘percentage’ and ‘capable of holding’ parts combined specifically are that air has a capacity of moisture it can hold within. Here is an explanation using a sponge (instead of air) to help explain this practically…

How does temperature affect relative humidity?

What is absolute humidity?

Both absolute humidity and relative humidity have a role to play in understanding the moisture conditions in the air, including with water leaks (which can impact that too).

Why is relative humidity important?

There are a number of reasons that relative humidity is important, including:

Needless to say as experts in finding water leaks and water damage restoration, we take measurements of relative humidity on a regular basis in our work. For example, when we are drying a property after a water leak or flood, we want to make sure that we are getting the (raised from the incident) relative humidity levels back to normal, safe and stabilised levels.

We have a really useful guide with examples of how this is a measurement used on many of the professional damp meter readings that we use in our work.

GET HELP WITH MY WATER LEAK

Other FAQs about relative humidity…

What is the difference between humidity and relative humidity?

How is relative humidity calculated?

There are two answers to this really. The simple one is in our definition and explanation at the top of this page. That is – “the amount of water moisture / vapour in the air, expressed as a percentage, relative to what that air is capable of holding at a given temperature”. However the more complicated answer is that it requires a number of other fairly complex measurements, which is why hygrometers are used. This Wikipedia page on humidity gives more detail if you are interested!

What is a comfortable relative humidity?

This can vary on the person but, usually, relative humidity between 30% and 50% is considered by many to be ‘comfortable’ and when people are putting HVAC (Heating Ventilation and Air Conditioning) systems in to control the air in their property, that’s typically the range they target. PIV units can help with this too.

What is the maximum humidity possible?

The maximum level of humidity is 100%. Think of it like a bucket, because of how the measurement is defined (as a percentage of what it is capable of holding) you cannot fill it to more than 100%.

What is a high relative humidity?

Humidity above 50% is often considered as high relative humidity for people, with anything above 70% being very high humidity.

At 100% the air is saturated with water – the air cannot hold any more water vapour in it. And so, it can be very uncomfortable, sometimes depending on the temperature. Think of it like fog on a cold day or a sauna on a hot day.

What is a relative humidity meter?

A relative humidity meter is simply a device used to measure the humidity in the air. They can be used in various situations, including in the home or in industry. They are also used in moisture meters that leak detection specialists use.

What is the ideal humidity in a house?

The ideal, comfortable and safe level of humidity in a house is usually between 30% and 50% relative humidity. Where in that range people prefer may be down to personal preference but 40% is considered by many as a good level to aim for. We look at this in more detail in our article about humidity in houses.

How to lower humidity in my house?

There are many ways to lower humidity in the house including using dehumidifiers, air conditioning, having good ventilation and extractors (especially in bathrooms and kitchens), drying clothes outdoors if possible, avoiding certain plants that can affect it and of course, making sure you do not have a water leak which can increase moisture and humidity levels.

What humidity does mould grow at?

This can vary but mould generally grows more aggressively in the 65% to 85% range in a property, it is more common in areas of high moisture and condensation including bathrooms especially. We have a full guide to mould.

What is dew point?

Dew point is most commonly explained as the temperature at which the air is cooled to in order for it to become saturated with moisture / water vapour. It plays a big part in condensation and is why you get condensation on a cold window, condensation on pipes or surface in a bathroom – which is why you see it more in winter than summer. Infrared thermometers can help with this.

What has an effect on relative humidity?

Relative humidity can be affected by many things, especially in the home. Including the general climate / weather conditions (especially if windows are open or not), the temperature, the presence of things adding moisture to the air – this includes showers, baths, cooking, kettles, laundry and of course, water leaks. It will also be affected by items put in place to control humidity (or that can impact it) like dehumidifiers, air conditioning, ventilation, heating etc.

Is there more humidity from a bath or shower?

We have done an experiment on this and written an article comparing bath vs shower condensation which gives some very interesting results!

The existence of humidity can cause condensation in loft spaces too, which is common above bathrooms and shower cubicles, especially if there is a fault with extractor fans. We have a guide to where bathroom water leaks most often occur.

Tags:condensationdew pointhumidityhumidity measureindustrial dehumidifierswater from air
We use cookies on our website to give you the most relevant experience, remembering your preferences and repeat visits. By clicking “Accept All”, you consent to the use of ALL the cookies. However, you may visit "Cookie Settings" to provide a controlled consent. Read More.
Cookie SettingsAccept All
Manage consent