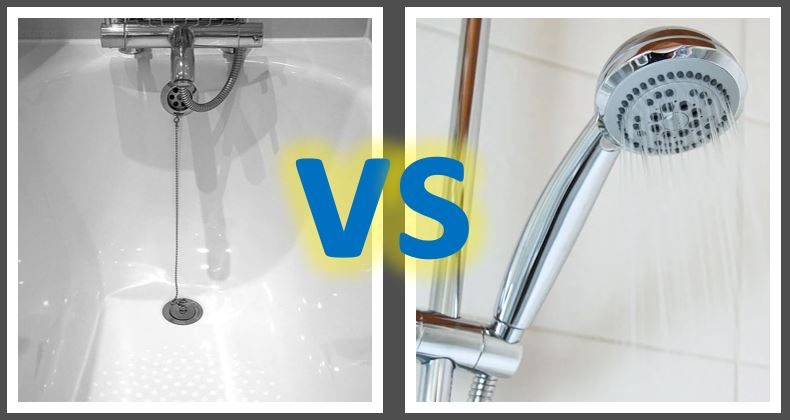 There’s always a good debate over different aspects of the Bath vs Shower debate, including:

Well we decided to take a look at Bath vs Shower – Which is Worst for Condensation? Why have we done this? Well we have talked previously about how bathroom condensation can be a problem and in turn can lead to mould problems in bathrooms and other parts of the house. So if you are looking to reduce condensation, which option should you take – bath or shower?

Remember that bathroom leaks are one of the most common leaks in properties too so with that, condensation problems and black mould problems they can be at the heart of many things related to water damage in your home. Closely followed by the kitchen and utility rooms.

Bath vs Shower – The Test

We have previously looked at how much condensation and humidity a bath can add to a bathroom, but clearly we needed to understand how this is different to a shower. The results were very interesting indeed with some clear differences.

To do the test we repeated our timeline from out bath test monitoring temperature and relative humidity in the bathroom (and outside it) before, during and after a shower. This was done the day after the bath test, so it was the same month of the year (November) to keep it consistent.

Here are the results in the chart below…

As you can see, we started the shower at the same time as the bath. One thing to note is that the two lines are on a very slightly adjusted scale because on the day of the shower, the starting relative humidity was a little lower than the day before so we have aligned them for comparison.

Interestingly, the sharp increase in Relative Humidity (RH) was similar to start with. However, the shower did then peak earlier than the bath and, importantly, dropped off quicker after the shower, quite dramatically so. That said, about an hour later, they had both eventually returned to similar levels (albeit still above their starting RH – about 10% more).

Bath vs Shower – Which is Worst?

So the obvious questions is to ask which is worst for adding moisture to the air, increasing humidity and potentially contributing to condensation and mould?

Well we calculated that for the duration of the test, baths are worse for condensation, in actual fact, we calculated by how much and…

In our test, baths added 15.7% more moisture into the air! However, we also have a very interesting tip to help stop condensation caused by a bath by reducing the steam released from it and humidity by 45%. Well worth knowing.

That is quite a clear and noticeable difference. However, it is not massively different (like 2 or 3 times more). It is quite interesting to compare these charts to condensation in kitchens and how kitchen extractor fans can help, the results are quite different.

You are possibly better thinking about how to reduce condensation overall…

How to Reduce Condensation from a Shower or Bath?

We have already written a detailed article on reducing condensation on windows, which has 20 tips in their to help. But what from that list (or other things) can help reduce condensation whilst having a bath or shower? Here are a few suggestions:

If you think you have a bath or shower leak, get help from a leak detection company such as ourselves. We will use specialist leak detection equipment and processes to help find the source of your leak. The sooner you can find and fix a water leak the better.

On the subject of testing and monitoring humidity, you may be interested in our article about silica gel which explains what it is, how it works and and a test we did.

Tags:bath condensationbath mouldbath vs shower differenceshower condensationshower mould
We use cookies on our website to give you the most relevant experience, remembering your preferences and repeat visits. By clicking “Accept All”, you consent to the use of ALL the cookies. However, you may visit "Cookie Settings" to provide a controlled consent. Read More.
Cookie SettingsAccept All
Manage consent