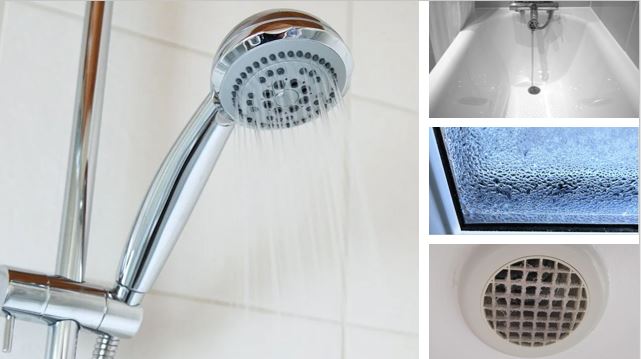 GET HELP WITH CONDENSATION OR DAMP

We have written extensively on the subject of condensation on windows and, most commonly, people have that particular problem in their bathroom, especially as bathrooms clearly have a lot of water sources which, in turn, means that relative humidity in bathrooms is higher than in other parts of properties. To show that, we ran a test…

To help to demonstrate how bathroom condensation can form after having a bath, we ran a test in a residential property. Here are the details of the test:

This is the timeline of events during the test:

Hygrometer readings were taken automatically every minute during the test. If you are interested, we also did a test to compare Bath vs Shower Condensation, which had interesting results!

We also have a separate test we did which showed that, with one quick trick, you can actually help to stop condensation when having a bath by reducing humidity / steam by 45%!

GET HELP WITH CONDENSATION OR DAMP

What is a Hygrometer?

A hygrometer is a calibrated instrument which takes readings of the amount of water vapour in the air, the temperature and combines them to give a relative humidity reading. Remember the definition of Relative Humidity is – “the amount of water moisture / vapour in the air, expressed as a percentage, relative to what that air is capable of holding at a given temperature“

So, because measuring relativity is dependent on temperature, all those different readings are needed to monitor the effect of having a bath on relative humidity, which in turn can have an impact on bathroom condensation. We used hygrometers in our silica gel packets test, which is fascinating too.

Here are the results of todays test…

The two charts below show the hygrometer temperature and relative humidity readings for inside the bathroom during the test period (top – blue chart) and outside the bathroom (bottom – yellow chart).

As you can see, before the test started the temperature in the bathroom was slightly below the outside room (a landing in this case) but the relative humidity was actually slightly higher.

Once the bath started to run the relative humidity (and bathroom condensation) rose dramatically from about 70% to above 90%. Notice how it actually rose a bit more to 95% as the person got out of the bath. That 95% means that the air (at that temperature) is holding 95% of the moisture it is capable of holding. In other words, it is almost saturated.

It is interesting to note that running the hot bath raised the temperature in the room, which is to be expected really. But also, it is interesting to see that (even with a good extractor fan and the door open) the relative humidity in the room stayed elevated and took some time to fall. Even then, 45 mins after the bath it was much higher than the control just outside the room (over 80% vs just under 65% RH).

Another thing to note is that, interestingly, the control (just outside the bathroom) hygrometer’s relative humidity readings did not change hardly at all. This is clearly helped by the negative air pressure that the extractor fan in the bathroom has – this means that air will flow into the bathroom from outside (via gaps in the door etc) not the other way around. This makes a big difference to stopping steam and bathroom condensation spreading to other rooms! This is one of the reasons that bathroom extractor fans run for a few minutes even after the light is turned off, for residual benefit.

The final thing to note is that, somewhat surprisingly, when the door was opened the relative humidity in the room outside only raised slightly, but still nowhere near seen in the bathroom.

As you might expect during this test, bathroom condensation levels raised during the test but because we followed our own advice on how to reduce condensation, it returned back to normal soon after. This is important because, as you can see from the test results above (even with a modern well ventilated bathroom) you will naturally get some condensation with a bath, especially in winter. The key thing is to make sure that it does not linger around for long times as that can cause mould growth, especially if bathroom condensation moisture is absorbed into a material that mould can grow on.

We have a more detailed guide on what causes mould which and another looking at anti condensation paint, both are worth reading too.

Tags:anti condensation paintbathroom mouldcondensation on wallshow to stop window condensation
We use cookies on our website to give you the most relevant experience, remembering your preferences and repeat visits. By clicking “Accept All”, you consent to the use of ALL the cookies. However, you may visit "Cookie Settings" to provide a controlled consent. Read More.
Cookie SettingsAccept All
Manage consent