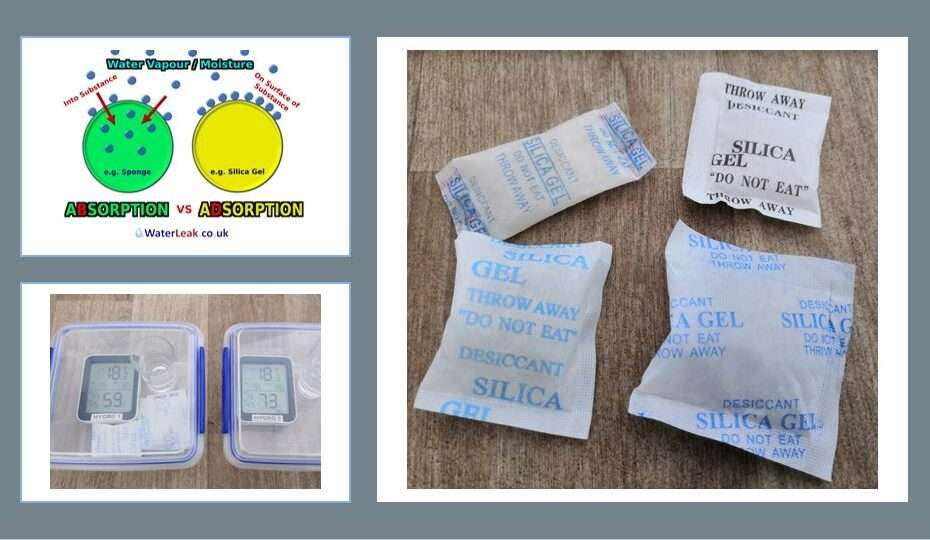 In our recent article about water damage restoration we talked about the difference between refrigerant dehumidifiers and desiccant dehumidifiers. Which we often use to help dry a property after we have found a leak delivering our water leak detection service.

The idea with these silica gel packets is that they trap any moisture present and protect the potentially sensitive electronic or food items. As you likely know, water and electric items do not mix well not only can they cause short circuits but they can also corrode certain materials. They are sometimes found in leather items, including shoes and handbags which helps to prevent mould, which leather is especially susceptible to.

If the relative humidity is enough and dew point within current temperature levels, moisture droplets will form. To find out more about this process, check out our dew point calculator.

But the big question is do they actually work? we ran a test to find that out and you can see the results of this later. But first…

What is Silica Gel?

Generally silica gel is a granular form of silicon dioxide aka silica (although like many things there are different varieties). For many people they will be most commonly found in sachets within electronic items or in some situations food substances in particular dried food (for example beef jerky – although that is very likely food grade certified) and these silica gel packets helped prevent the food from spoiling due to moisture exposure.

Silica is known for its adsorption properties (notice we didn’t say absorption properties – more on that later!) meaning it attracts moisture help the air onto its surface thus reducing relative humidity of the air and helping to keep the product nearby dry.

The fact that silica gel has a high specific surface area helps with the process of adsorption. Think of it as a bit like a golf ball whereby the dimples increase the surface area versus a smooth ball, like pores. Once the silica gel has trapped this moisture on the surface it can be removed through drying to help return it back close to its original state.

In a desiccant dehumidifier this happens automatically and the warm moist air is vented out of the property allowing the dehumidifier to take on board further moisture from the air via its silica wheel, until such point as the property is stabilised to the dry state that is normal for that property. Interestingly silica gel can actually trap around 40% of its own weight as water, which is significant.

So what is the difference between adsorption and absorption. starting with absorption first, think of it as like a sponge or paper towel. When it comes into contact with water, the water is absorbed into the fabric / structure of the material, this is adsorption. However the process of adsorption it’s different.

The diagram below helps to demonstrate the difference:

A material such as silica gel with good adsorption properties attracts water molecules from the air onto the surface of the material. However it is not absorbed into the material. This property is beneficial for a desiccant dehumidifier modifier because the moisture only needs to be removed / extracted from the surface not within the pores of the material.

we thought it would be interesting to run a test to show if and how silica gel works with a small-scale experiment. For this experiment we used:

What is a Hygrometer? 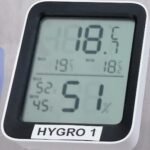 A hygrometer is a device used to measure the moisture (water vapour) in the air which then measures for relative humidity. Modern digital hygrometers often log the data over time and measure other things often such as temperature (which has an impact on relative humidity) and vapour pressure in the air.

Firstly, we put two of the hygrometers in each of the lunch boxes and closed the lid, waiting for them to stabilise to take control readings. We then filled each of the shot glasses about half full with water from the tap, cold water to be specific. We then opened each lunch box and stood the shot glass with water in it into the box and re sealed them.

After a period of time we briefly opened the first lunch box and placed in for small silica gel packets into the box. We then tracked and recorded the relative humidity in each of the two lunch boxes using the hygrometers which had data logging facilities the results of this are shown on the charts below.

As you can see, the two lunch boxes we’re at about 52% relative humidity before the shot glasses (with water) were added. Once they were added, this had a noticeable impact on the relative humidity in each box. Rising by about 20% in under 30 minutes.

To make the test that bit trickier we added the silica gel packets to the box with the slightly higher relative humidity. You can also see how the first box, once the silica gel packets were added, dropped Immediately with the addition of the silica gel. Over time, the gap in relatively humidity measures widened to the point at which they were over 27% apart at the end, which is a considerable variance.

Here is a quick video showing the silica gel test:

In a way, on a small scale, this simulates the process of drying a property after a water leak, for example a ceiling leak from a shower. As we have said in previous articles the presence of additional water from a water leak in a room can raise the relative humidity. This in turn can cause issues with secondary problems such as condensation on windows and walls and black mould problems.

So in conclusion, based on the evidence collected, silica gel packets do work, albeit on a small scale and for specific purposes. To dry a property it would not be practical, that is where professional drying equipment (which we have) comes into its own.

If you want to see other videos, see our Slow Motion Water collection.

If you have any of thee problems or need help finding a water leak at your home with our trace and access service, get in touch with our friendly team today. We offer these services to both domestic and commercial customers, including commercial leak detection.

If you are interested in seeing some other tests that we have ran check out these articles:

Tags:dehumidifiersmoisture in airrelative humiditysilica gel dehumidifiersilica gel packetssilica gel sachets
We use cookies on our website to give you the most relevant experience, remembering your preferences and repeat visits. By clicking “Accept All”, you consent to the use of ALL the cookies. However, you may visit "Cookie Settings" to provide a controlled consent. Read More.
Cookie SettingsAccept All
Manage consent