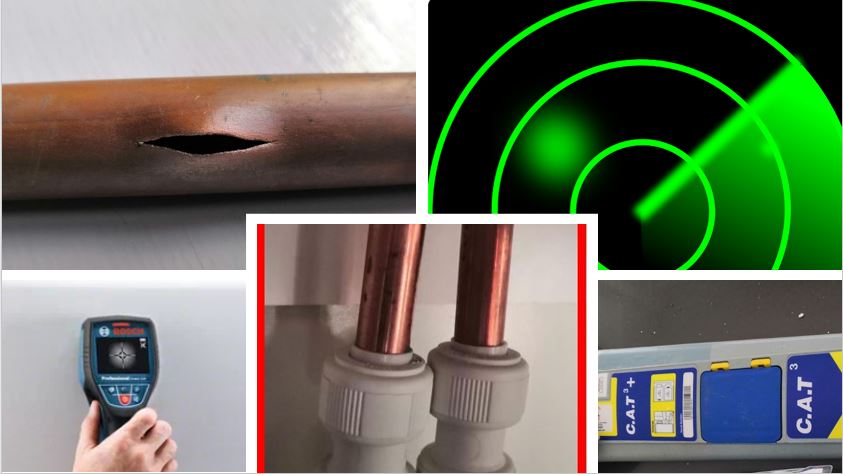 How do you Detect Water Pipes?

There are many ways to detect water pipes in a property and many different pipe detectors, each of which is used for a different task. Some of them detect them directly others do it indirectly. What do we mean by that? Well you can either detect the physical pipe or, for example, what is in the pipe (water in our case) and the noise it makes through acoustic leak detection – water running through a pipe makes a very small noise and the professional devices we use can pick that up. Clearly you can also pick up heat or cold from pipes with thermal imaging leak detection too.

We have a page on dedicated to the full range of leak detection equipment. However, let’s look in some more detail on direct pipe detectors (or pipe locators as they are often known)…

Pipe detectors can he useful when trying to locate frozen pipes or seeing what is causing an F1 boiler fault on your central heating system.

How do you Detect Plastic Pipes?

We said above that a CAT and Genny is a great pipe detector, specifically for detecting copper pipes around a house. Well what about detecting plastic pipes and plastic water pipe leaks?

Plastic pipes are not as simple to find as copper. However, there are ways to detect plastic pipes, with some methods indirect. As we said above, acoustic listening and thermal imaging leak detection can be used as pipe detectors for plastic pipes. Often you can use borescope inspection cameras to help find the path of plastic pipes, assuming they’re accessible.

Another way is actually to use a CAT and Genny (with a twist) as pipe detectors for plastic.

If there is a way of accessing the pipework, it is possible to thread flexible metal wire, or even something like an electricians ‘snake’ / wire fish reel / taps – provided it is conductive (and so the Genny / Generator can be attached to it to transmit a signal). Clearly that is not as simple or effective as on copper pipework but it can be used in some instances, not commonly though as other options are simpler. There are few situations where this is the only or best solution.

Again, this is why leak detection specialist engineers carry multiple types of leak detection equipment to (a) use them when they are the best option and (b) to give multiple sources of information to both trace and access water leaks. This will likely include…

These are a common tool that there are even domestic versions of, available from DIY stores or online. They are designed for home use, often when people are doing things like drilling into walls so that they can check they are not going to drill into studs, electric wires or water pipes etc (they often have different settings for each). Although a leak detection engineer would carry one of these (for various purposes), it would not be their main tool for pipe detectors.

There is an interesting video by the ‘Project Farm’ YouTube channel about these devices.

Our leak detection technicians have access to all the equipment needed to help maximise the chances of finding a leak in your property, wherever possible using non destructive tools such as pipe detectors.

What is a multi use detector?

This is generally a name given to a device used to detect things in your walls, floors and ceilings such as studs, framing, wires (including electrics), pipes and metalwork.

How do I find out where my water pipes are running?

The devices shown above can be used to trace water pipes around your property or around your garden for example, these are used in conjunction with other tools to find water leaks, each has its own purpose. If someone has a damp patch on ceilings or a water leak from an upstairs flat, we will check for pipes nearby.

Tags:pipe location devicepipe locatorunderground pipe locatorwater pipe locator
We use cookies on our website to give you the most relevant experience, remembering your preferences and repeat visits. By clicking “Accept All”, you consent to the use of ALL the cookies. However, you may visit "Cookie Settings" to provide a controlled consent. Read More.
Cookie SettingsAccept All
Manage consent